Our articles are now online! 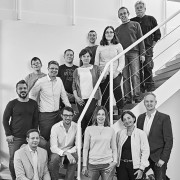 Who’s actually behind … ... the design of Flip?

Flip , established in 1992, is PHILIPPI’s In-House Design Team and together with them, Jan Philippi creates his own collections.

Making things useful and viable always stand in their focus: What is useful? And beyond that, what else could someone need?

Often, ideas constantly circle in the team’s thoughts until the “eureka moment” comes, when Jan Philippi sees something during one of his many journeys in one of this world’s many metropolises. Whether it’s a design element found in a magazine, in a hotel, an idea captured from the streets or even a natural shape found in the countryside… That’s the moment that an idea is made real.

Some objects are created by simply altering the existing, changing materials, the surface or the proportions. This often leads to a new interpretation of many classics as they are contemporarily transformed.

A great example: Jan Philippi has always taken to the classic colorful, wooden pick up sticks called “Mikado”. He thought to himself; it must somehow be possible to simplify the game’s look, without losing its original form and function. His grandmother’s knitting needles yielded the fundamental idea for YAP Mikado: The sticks could be made of metal; the many colors simply replaced by combinations of matt finished and polished. With YAP Mikado, made of stainless steel, PHILIPPI won their very first Designer Award. Many further awards followed.

In the meantime, Flip has created more than 100 items found in the current PHILIPPI catalog. One of their greatest projects is and remains the GIORGIO leather collection of stunning and practical traveling companions, which is continually being updated and expanded.